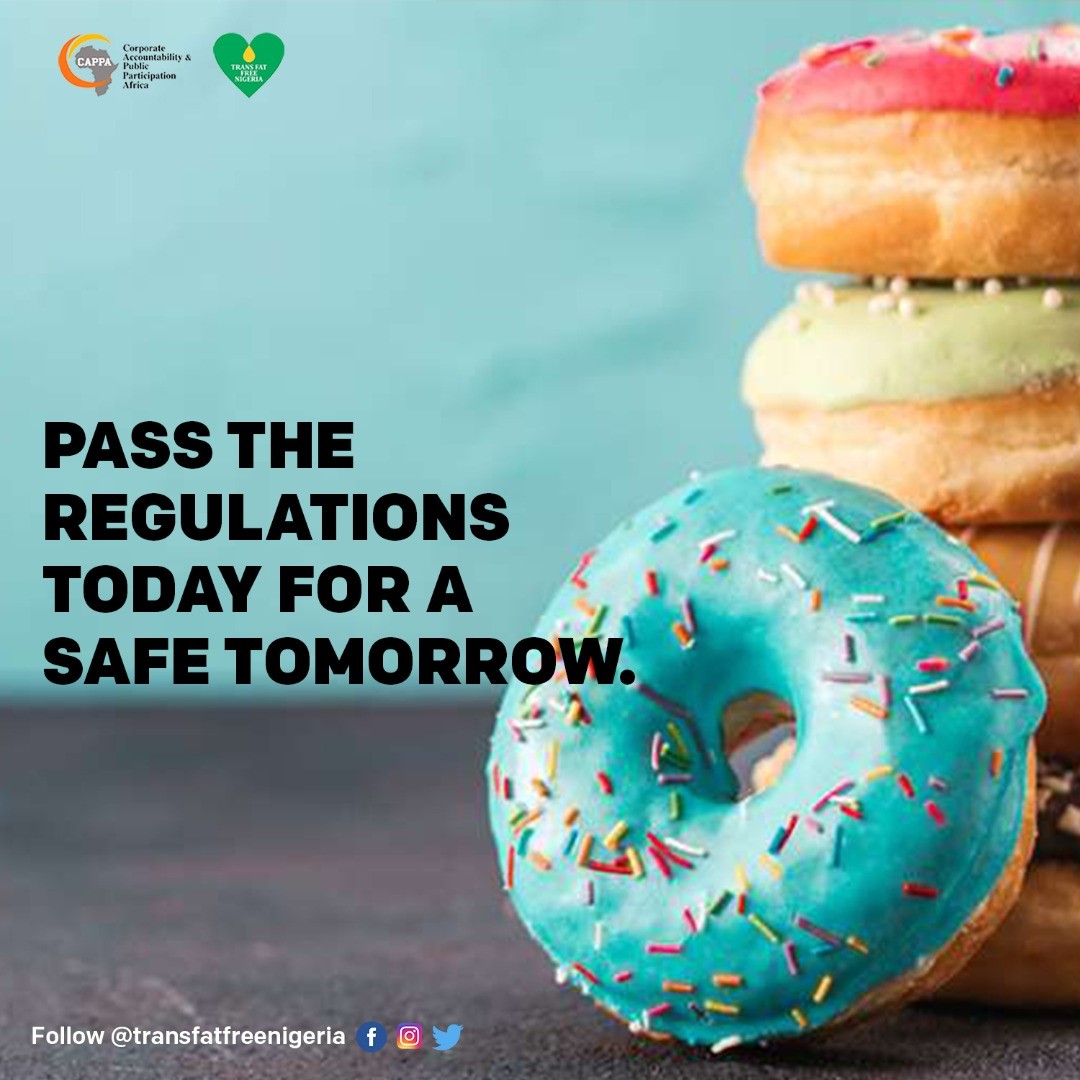 #TRANSFATFREENIGERIA: NIGERIA CAN LEAD THE WAY

“This pandemic has magnified every existing inequality in our society – like systemic racism, gender inequality, and poverty,” – Melinda Gates

When Melinda Gates made the above statement, many did not streamline it to what we see in our general policy system, and it is why I have decided to open this discourse with the quote.

Added to the pain of not knowing what the next meal might be, which many are oblivious of, is the uncontrolled consumption of toxic chemicals that do not only contribute to cardiovascular diseases but has no impact on taste or cost of their favourite foods. This toxic chemical is called trans-fat.

Industrially - produced Trans Fatty Acids (iTFAs), also called trans-fat, are formed when oil manufacturers decide to turn pure liquid vegetable oil to solid or semi-solid oil. It can also occur when cooks keep using refined oil to cook repeatedly. For manufacturers, this creates solid or semi-solid thick, hard margarine, and they create this product via hydrogenation. Hydrogenation is simply a process by which vegetable oils are converted to solid fats simply by adding hydrogen atoms. Trans-fat occurs in two states – the natural state (as found in animal products) and industrially-produced trans-fat (the brainchild of those who worry about revenue rather than the good of the public).

According to the World Health Organisation (WHO), industrially produced trans-fat is a man-made harmful compound found in foods, fats, and oils. These harmful industrially produced trans-fat clogs arteries and increases the risk of coronary heart disease. The global scourge of coronavirus, more than anytime, has shown that heart health must be taken serious and not left in the hands of a few. It is the business of everyone; a burden for all.

In Nigeria, a country where stakeholders have continually decried the lack of data for planning and programming, a killer substance like trans-fat is too dangerous to be left carelessly on food shelves. Trans-fat is also responsible for more than a half million deaths around the world every year from heart disease and in a country like Nigeria, where more than half of the population pay for health services out-of-pocket, one will understand the important task ahead of everyone.

Relying on available scientific evidence and data, the WHO launched the targeted campaign to eliminate industrially produced trans-fat in global food supply through a REPLACE Action Framework. The campaign code named REPLACE is an effective way to reduce cardiovascular diseases related deaths attributed to TFA.

The REPLACE action package which stands for Review, Promote, Legislate, Access, Create and Enforce is a proper thematic programme that considers the state of each country on industrially produced trans-fat, provides guidelines on how to legislate/create regulations to sanitise the country’s food production and put the power to effectively choose healthy foods in the hands of the people. Efforts to eliminate TFA advance the United Nations’ Sustainable Development Goals (SDGs), which include a commitment to reducing premature death from non-communicable diseases by one-third by 2030 (target 3.4)

With over 23 countries setting the pace across the world, Nigeria should be compelled by overarching realities to step in and show its leadership on the continent of Africa. I have mentioned at various fora that Nigeria, as a leader in West Africa, has the golden opportunity to be an example and reinforce this status by advancing a WHO "best buy" measure for protecting health, making populations more productive, and saving on health care costs through iTFA elimination.

I have also mentioned earlier that the task ahead is for all, herculean but important with the statutory role of National Agency for Food and Drugs Administration and Control (NAFDAC) saddled with the responsibility to implement regulations that help with food safety. In 2019, the agency took a significant step by drafting and making public two regulations that will help to cleanse the Nigerian food shelves of these toxic chemicals. These draft regulations need to be passed and gazetted. It is after this important action that every one of us can contribute effectively to saving lives from cardiovascular diseases related deaths.

The continent of Africa with its endemic poverty can help the people live healthier and longer if it speeds up processes of eliminating trans-fat in line with WHO REPLACE package by 2023 and this opportunity presents Nigeria an even better way to keep her young population stronger.

It is worthy to note that more than 29 countries around the globe have taken decisive steps to eliminate TFAs already – so it appears the world seems to agree with this very important initiative. This goes a long way to show that eliminating trans-fat from the food supply and replacing it with healthier alternatives is feasible

The wide gap between those who can afford luxury and those who just hunt for the next meal can now be bridged when Nigeria, through NAFDAC, The Ministry of Health, and other key decision makers, eliminates trans-fat in food supply and guarantees healthy eating and living for all.