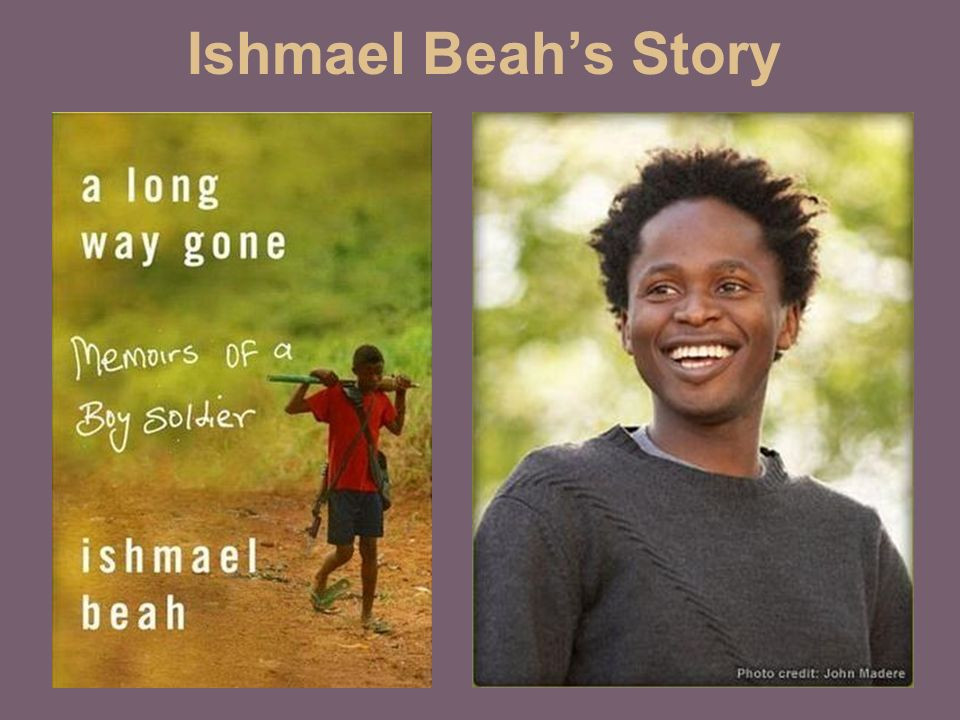 Reading the book A LONG WAY GONE Memoirs of a Boy Soldier ISHMAEL BEAH
have taught me that history is not just about listening or fantasizing about the past, it's also about avoiding similar events that has happened in the past. One of them is War most especially civil war.

Civil war through my understanding from the book is a thief that has not only come to destroy things and kill people but also to steal the future of young kids growing up.

The worst set of people are those that have been blinded by greed and arrogance and as an adult they are worst than the devil they are the perpetrators of the most crimes that world has ever known they hid and cocoon themselves under their ideology without considering the people it affect.

We understand that they are lots of evil and corruption going on in several countries but we can't use evil to cure evil. When two elephant fights it's said that the ground suffers. Well that is the case of many of the Sierra Leoneans in the book A LONG WAY GONE Memoirs of a Boy Soldier ISHMAEL BEAH .

ISHMAEL BEAH was only twelve years old when he was exposed to evil, death, guns killings and so many other.
He is a stubborn boy who loves Rap and also loves to dance, his elder brother taught him and some of their friends how to dance the white man dance "Hip Hop" and they were about to go for a talent show leaving their village to another villages miles away without telling their parents. Unknowingly that will be the last time he saw them.
War!!!! Something so dreadful that I fear listening about it. We love watching movies of war and are happy when the protagonist becomes victorious but in real life war is different. It takes away the innocent from the world and leaves the evil ones.

War!!! A sad event, my mouth stinks at the mention of the evil word. It destroyed the future of mothers, fathers and kids most especially. An environment where there is war is not where I want to live in.

ISHMAEL BEAH story give an insight of what happened when there is war.  ISHMAEL BEAH lost his parent and witnessed firsthand the gruesome killings butchering of innocent people by the rebels, ISHMAEL BEAH saw blood flows like water he couldn't believe his eyes but still he needed to survive. He was caught several times by the rebels( RUF) of Serra Leone but he was lucky. In this book lots of girls we're raped, male children were asked to have sex with their mothers, young boys between the ages of 7 and 15 were asked to join the rebels or they loose their lives, many were asked to burn their villages, shoot their families, slaughter their friends and other unthinkable things happened. Tears dropped down my eyes when I read through the book it was so devastating I have never been so emotional.

ISHMAEL BEAH was a bit lucky, he was able to find peace for a short while but it turned sour when the rebels attacked again, now they were winning against the Army protecting them. The only choice they claim to have was to initiate those Little boys into the army,  they brainwashed them to kill all the rebels the same tactics of turning kids into soldiers that the rebels used became the option of the army.

They taught the kids how to carry weapons, knives how to reload guns how to stab their enemies in the eyes, heart and tear them apart. This was sad, the kids between 7 and 17 who didn't know anything joined the war, ISHMAEL BEAH's friends were killed while fighting.

ISHMAEL BEAH became a full time soldier, he was no longer a scared young boy, he killed without mercy, smoked and drug himself from thinking he was just 13 years old.

One glorious day, he was saved not just from the war but also from who he was becoming, a monster who kill people without thinking.
The UN intervened and took all the young boys away from the waring area but still it became difficult to young boys already addicted to fighting, killing, drugs and dirty environment to be integrated back to the society. It took a while but he came back to his senses he was revived and integrated back to the society.

Summary about ISHMAEL BEAH book you can get to read and hope that things like this are never repeated again.