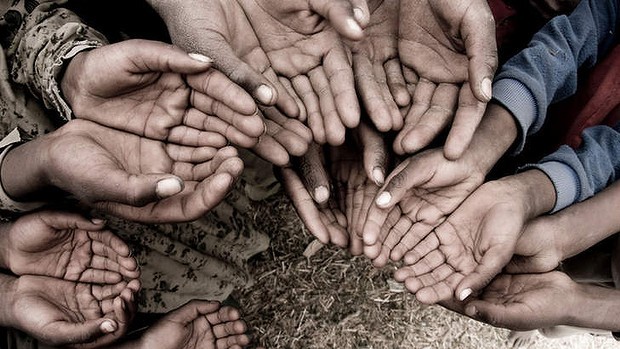 A very controversial topic, but before everyone try to hang me, let's get somethings right.

What Is Religion
1. The belief in and worship of a supernatural controlling power, especially a personal god or gods.
2. A particular system of faith and worship.
3. Any practice that someone or some group is seriously devoted to.

Religion is all about Belief, Worship, Faith, Practices, and Devotions, but never about the Knowledge and Understanding  of God. 'Hosea 4:6' My people are destroyed for lack of knowledge.

What is Poverty
1. Any deficiency of "elements" or "resources" that are needed or desired, or that constitute richness; as, poverty of soil; poverty of the blood; poverty of ideas.

Poverty is a 'deficiency' in the quality of the 'state' of your 'mind'.
knowledge add quality & Improves the state of your mind.
Ecclesiastes 10:15 The labour of the foolish wearieth every one of them, because he "knoweth" not how to go to the city.
Let's get something's cleared out.
1. Poverty is not the lack of money, so money is not the antidote for poverty.
Every poor men may lack money, but not every men without money are poor.

2. Christians may be Religious, but Christianity is not a religion.
Poverty and Religion are 'Distinctively Similar', different on the outside, but shares same root. 👉
The true concept of poverty and religion is to alter the state of your mind, by depriving you access to knowledge, in order to keep a person in a place or a state, knowing nothing or little about what they do.

Poverty or Religion will make you swim through the fire, 🔥 just to save your skin, 'knowing' not, that the fire will not spare the skin.

Whenever Jesus shows up in another form his disciples always find it hard to recognize him.
Matthew 14:26
And when the disciples saw him walking on the sea, they were troubled, saying, It is a spirit, and they cried out for fear.

Poor & Religious people always doubt any new or strange thing, for they lack the capacity to understand.
"Matthew 14:31"
And immediately Jesus stretched forth his hand, and caught him, and said unto him, O thou of little faith, wherefore didst thou doubt?

Ask poor men to invest, they always have a reason why it will fail. Religious people only believe that which they are used to and doubt anything outside of that which they know.
The only way to kill a tree regardless of it's kind of fruits, leaves, or name, is to kill the root, it may be big or tall, that doesn't matter, kill the root and the tree is gone.

Matthew 14:32
And when they were come into the ship, the wind ceased.

Allow that which is new & strange but true into your mind & the walls of ignorance will fall.

A professor once said everyone has a bag we all carry around, & inside of it are loads of ignorance.
So he said, reduce your ignorance.

Ignorance is the root of Poverty & Religion.

The Disciples of Christ are having a hard time believing in the miracle Jesus did when he fed 5000, because of their ignorance.

Mark 6:51-52
51. And he went up unto them into the ship, and the wind ceased: and they were sore amazed in themselves beyond measure, and wondered.
52. For they considered not the miracle of the loaves: for their heart was hardened.

Until you acquire the knowledge of the truth, you're not free from the grip of either Poverty or Religion.

"John 8:32"
And ye shall know the truth, and the truth shall make you free.

Poverty and Religion are twins, with same genetic makeup, from the same parent, with the same traits, but with a different look, and they're both allergic to the "knowledge of the truth".

An Expert Level FullStack Software Developer, but I also love to make my pen speak from the depths of my imagination. #Factman