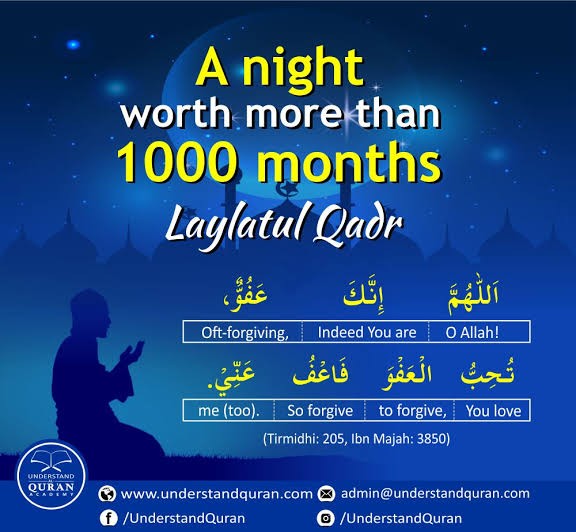 A NIGHT WORTH MORE THAN 1000 MONTHS; LAYLATUL QADR.

The Night of Power is better than a thousand months.

The Prophet has taught us an easy and enjoyable way to commemorate it, so that our souls may always be in close communion with it and with the universal event which it witnessed.

He has urged us to spend this night of each year in devotion.

Islam is not mere formalities. Hence, the Prophet specifies that the consecration of that night must be motivated by faith and devotion. This would make its consecration by any individual an indication of his or her full awareness of the farreaching effects of what took place on that night.

He (The Prophet PBUH) said:

'Say: O Allah, You are pardoning and You love to pardon, so pardon me.'

Exhaust your last days of Ramadhan.

Wake up for tahajjud prayer and persistently recite the aforementioned beautiful Dua.

May Allah Accept our ibadah as an act of worship, Pardon us and grant us goodness in this world and the hereafter.