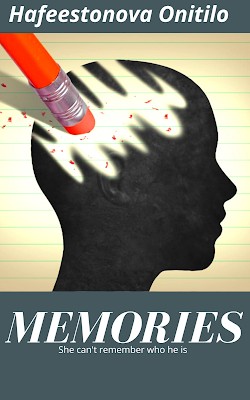 Anthony hasn’t been himself, everything he did to make sure she remembered him didn’t work, and at this point, he could tell from her continuous reaction, she was also getting tired of him trying to make her remember a memory she doesn’t remember.

Before she was discharged from the hospital, Anthony showed her most of the pictures and videos they made before the accident. Being a photographer, she created those images and videos in a way that when you look at it, all you would feel is love; the love between two people. But as she was viewing it, she didn’t feel any emotions, well that’s not entirely true, she did feel something, she felt scared, she could see how happy she was in those pictures and videos but looking at Anthony now she doesn’t feel anything for him, she felt scared, since she woke up from her coma, there has been something about Anthony that scared her.

Anthony had wanted to wait till she was discharged from the hospital before showing her the wedding ring and their wedding pictures but considering that the previous images he had shown her wasn’t bringing back memories, he decided to show her the ring, telling her the memories behind it.

A month after they had started dating, she and Anthony went shopping in the mall, as usual, they took pictures and made videos creating some fooling around memories. While in the mall they walked past a jewellery store, Anthony saw a lovely necklace and felt it was going to look good on her, so he said they should go check it out. While Anthony was negotiating the price of the necklace, she was checking out other stuff in the store and that was when she came across the ring. According to her, it was the most beautiful ring she has ever seen, she called his attention to it and said: “….if you ever plan on proposing to me, this is the ring I want”. He laughed and said, “who told you I will be proposing with a ring self”. She faced him and said, “I want you to get that ring and propose to me right now”. He thought she was joking, but she wasn’t, she asked the salesgirl the price of the ring and after she was told the price she said to Anthony “I don’t mind paying for it, just take this ring and propose to me right now”.

Anthony obliged, told the salesgirl to bring out the ring for them and as the salesgirl handled the ring over to Anthony, she said: “forget about all those speeches or getting on your knees crap, just put the ring on my finger, I have married you already”. Like someone that is being controlled, Anthony did exactly what she said without asking any questions, she had this a radiant smile on her face as Anthony put the ring on her finger, and she kissed him passionately for about two minutes and said “I’m yours forever"

While she was in the happiest mood, Anthony had a lot of questions running through his mind, for example, “what’s so special about this ring?” “Did I really just propose to her? That thought made him smile a bit. He finally got the answers to his questions when they got home, she told him “The the moment I saw that ring, I couldn’t imagine not having it on my finger, most importantly, I couldn’t imagine another man putting a ring on my finger if not you, to me that was the moment I realise I want to spend the rest of my life with you……”