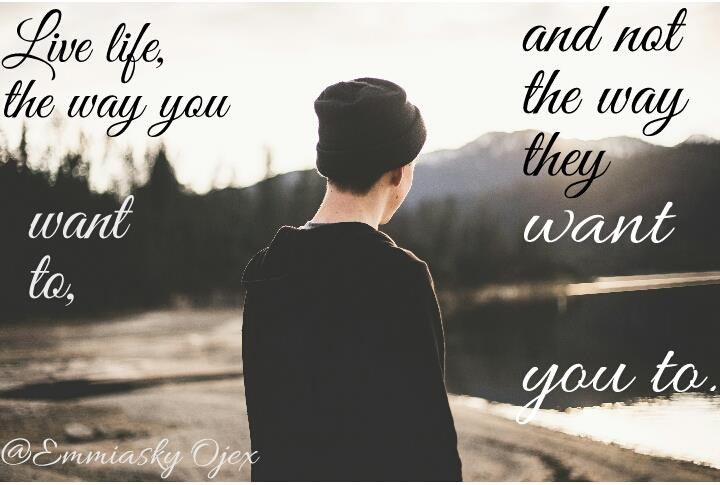 While growing up, we get  to hear lots of feedback on our decisions, on purchases, payment methods, dress sense, school choice, lifestyle and so on, some we take seriously and others not really.

How about you yourself, how often do you double check the things you're told to and not to do?

We've all heard stories of adults complaining after working hard and not getting good returns (financially) come back to their parents saying;

“Dad, you do realize you're the cause of all these, because you didn't allow me study what I wanted to and forced me to study what you wanted.”

To be more realistic here, I've heard on these stories more than 10 times, of students complaining their parents do not allow them study/become what they want to, prolly because of a legacy that has been laid down (generational).

“Son/Daughter, I am your Father/Mother and you shall do what I say. (kudos to Nigerian parents though, that's when they'll start with the eulogies which will bend you against your will)

As you know, I, Tapa Seriki, I'm a well known doctor, owning lots of hospitals in the nation and beyond and if you don't become a doctor, who will take my place?So, you want to study law and tarnish the image that led you to becoming this great man/woman?No my dear, you cannot study law, you have no say in this.You just have to become a doctor” (this occurs mostly to children from a family of 3 (a single child and parents)

but they do not think or care less about the passion of the child, about the gift and divine knowledge of the child but decide to enforce their will on such a child.

There is a reason why Evg. Ebenezer Obey said in his song “If you notice a child likes to play(with) the guitar, let him, he might be the next commander (himself)”

which seems to mean that parents should try to encourage the children do what they love or what they are interested in(if it is moral), more than what they ourselves want us to.

Now, the question is left to you to answer!

So many people have been forced to agree to the fact that since they are the sole survivors of their family, they are the only ones who can continue to build the family's lineage and thereby create a mindset for themselves that they are the ones who can keep it going but then, to do that, they (most) end up neglecting themselves (their true potentials, their real talent, their true call), just because they think it is better to keep the family's lineage in order.

parents should try to encourage the children do what they love or what they are interested in(if it is moral), more than what they ourselves want us to.

So many have lost it in life because of this simple factor, they want to do their parent's wish and when some discover that they cannot, they get frustrated some even go to the extent of hurting themselves or doing worse things.

She had to study law and was forced to become one,this unfortunately caused her to lose her flair for scientific matters, but layer on she ends up discovering that her life isn't for Law but Science (Physics)!

You can imagine how she'll feel, so many people live with this everyday of their lives, the fact that they lost it due to the talks they allow into them, through people, circumstances and others situations.

Now, back to you!

Has this occurred to you before?Have you had something you really want to do?Have you had a flair for architecture, drawing, tailoring, shoe making and so much more?

Were you stopped just because they think these things are irrelevant?

What did you do?

Did you too agree after being cajoled for a while?I always tell people who come to me with this;

“YOUR PARENTS ARE NOT GOING TO LIVE YOUR LIFE, THEY'LL LIVE THEIRS AND DIE, THEN YOU'LL BE LEFT WITH YOURSELF!ARE YOU PLANNING TO LIVE FOR THEM TILL THEN?IT MIGHT BE TOO LATE”

It's quite simple to break from these

1. Let your parents know your reason for wanting to do that which you've chosen and not what they want.

2. It's your life, politely tell them that! (I said politely ooo, if you do it wrongly and get slapped, I wouldn't be held responsible)

3. Make a deal with your success (The hardest part)

P.S: This is not in any way to meant disrespect to the parents, they just do these things to make their children have what they (parents) think is best for them (the children), but to implore them to enable their kids get the best of themselves while they still can.

From a friend that loves you,