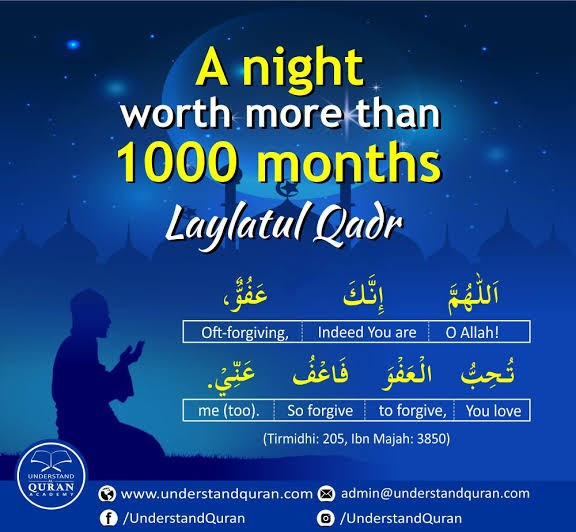 LAYLATUL QADR; A NIGHT WORTH MORE THAN 1000 MONTHS.

Laylatul Qadr ( Night Of Power/Majesty ) incites a thousand months’ worth of rewards in a singular night.

If one executes any acts of worship or goodwill on this night, they reap the rewards of having performed the good deed for a thousand months (83 years and 4 months).

This is believed to be the night that Allah (SWT) revealed the Holy Qur’an to the Prophet Muhammad (PBUH), linking the Night of Power (Laylat-ul-Qadr) and revelations to one another.

As a result, it’s during this night that our destiny is said to be written for the remaining year.

Consequently, everyone should make the most of this significant occasion by gaining as much reward as possible.

Remember, the Night of Power is better than a thousand months.

In the name of Allah, the gracious, the merciful.

1. Verily! We have sent it (this Qur'an) down in the night of Al-Qadr (Decree)

2. And what will make you know what the night of Al-Qadr (Decree) is?

4. Therein descend the angels and the Ruh [Jibrael (Gabriel)] by Allah's Permission with all Decrees,

5. Peace! (All that night, there is Peace and Goodness from Allah to His believing slaves) until the appearance of dawn.

In another verse He, Allah said,

i.e., the matters of deaths, births, provisions, calamities for the whole (coming) year as decreed by Allâh.

Narrated ‘Âishah (raa): Allâh’s Messenger (SAW) said, "Search for the Night of Qadr in the odd nights of the last ten nights of Ramadan." (Sahih Al-Bukhari, Vol. 3, Hadith No.234).

The Prophet has taught us an easy and enjoyable way to commemorate it, so that our souls may always be in close communion with it and with the universal event which it witnessed.

He has urged us to seek the night of Qadr in the last odd nights of the last ten nights of Ramadan and we should spend this night of each year in devotion.

Take note that night comes first before day in Islam.

You would notice that we do pray Taraweeh  (Ashamu) first and then fast the next day.

Therefore, immediately after maghrib we have commence the night of the next day.

In another Narration, He (SAW) also said: “Whoever spends the Night of Power in worship, with a pure motive of faith and devotion, will have all his past sins forgiven.” [Related by al-Bukhari and Muslim.]

Islam is not mere formalities. Hence, the Prophet specifies that the consecration of that night must be motivated by faith and devotion. This would make its consecration by any individual an indication of his or her full awareness of the far reaching effects of what took place on that night. .

There are plenty of things you can do on this auspicious night to maximise your blessings and reward. We have detailed some of these below:

He (The Prophet PBUH) said:

'Say: O Allah, You are pardoning and You love to pardon, so pardon me."(Ahmad, Ibn Majah, and Tirmidhi).

• Endeavour to always pray you salat in congregation.

Exhaust your last days of Ramadhan.

Wake up for tahajjud prayer and persistently recite the aforementioned beautiful Dua.

We thank Allah (SWT) for the beauty of this Holy night whilst praying that He accepts our good deeds on this world and hereafter.

May Allah Accept our ibadah as an act of worship, Pardon us and grant us goodness in this world and the hereafter.

Abdulrasheed Mubarak is a Muslim, student of knowledge, Writer, and Serial Volunteer. His works have been featured in highly reputable Magazines & Newspapers, such as Nigerian daily, Kogi reports, and Ohon Voice Magazine. He is currently a student of Common & Islamic Law at Bayero University, Kano