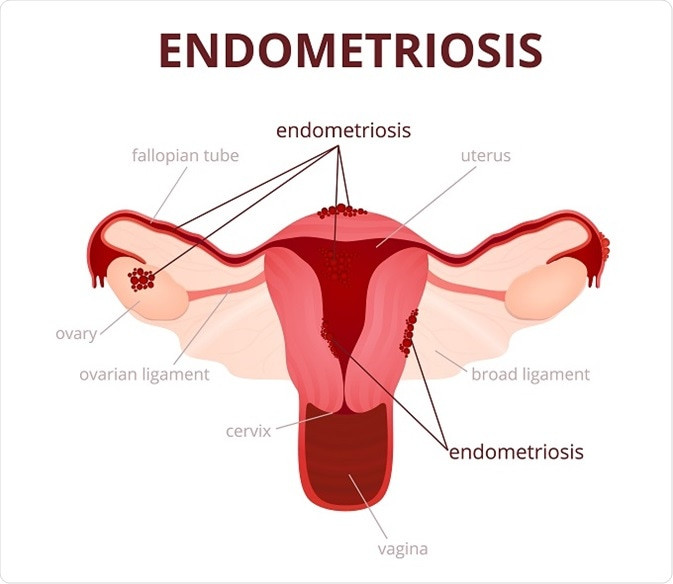 Endometriosis is a painful, chronic disease where tissue that normally lines the uterus grows outside of the uterus. Such areas of growth include the abdomen, on the ovaries and fallopian tube as well as the bladder, bowel, vaginal, cervix, and the area between the vaginal and rectum; rarely found in the lungs and brain. The misplaced tissue build up, breaks down and sheds like the tissue that lines the uterus during menstrual cycles. However, the misplaced tissue has no way of exiting the body which results in chocolate cysts, internal bleeding, inflammation, bowel problems, infertility, scar tissue formation, and adhesions. It typically takes 7-10 years to diagnose, so talk to your doctor if you notice symptoms like pain, heavy bleeding, bad cramps, bloating, and spotting between periods.

Stages of Endometriosis
Based on what the doctor sees during the laparoscopy, the endometriosis is categorized into four different stages.

Stage 1 (1 to 5 points)
In Stage 1, the endometriosis is considered “minimal.” The implants are small, few in number, and shallow, although keep in mind that these stages don’t correspond to pain and discomfort levels (more on that later). Just because a woman might have Stage 1 endometriosis, this doesn’t mean that her pain is minimal or that the effect on her life has been minimal.

Stage 2 (6 to 15 points)
In Stage 2, the endometriosis is considered “mild.” Doctors might find more implants, and they are deeper than the superficial implants found in Stage 1 endometriosis.

Stage 3 (16 to 40 points)
Stage 3 is “moderate” endometriosis. Not only are there many deep endometrial implants, but there may be endometrial cysts on at least one ovary. These endometrial cysts form when the tissue attaches to an ovary and begins to shed blood and tissue. The blood collects and turns brown, which is why these growths are also known as “chocolate cysts.”
Doctors may also find thin bands of tissue, called filmy adhesions, that bind organs together. These adhesions are the scar tissue that form when the body tries to heal from the inflammation caused by endometriosis. They can make organs stick together when they shouldn’t and are thought to be the cause of sharp, stabbing pains, as well as nausea, in women with endometriosis.

Stage 4 (40 or more points)
Stage 4 is the “severe” stage of endometriosis. In addition to many deep endometriosis implants, there are large cysts on at least one ovary and many dense adhesions throughout the pelvic region.

The Endometriosis Foundation of America, for instance, has divided up the disease into four categories depending on where the disease is located and how it affects the patient:

Category 1: Peritoneal endometriosis
The endometriosis is located on the peritoneum, which is a membrane that lines the abdomen. This is the most minimal category.

Category 2: Ovarian endometriomas
There are endometriomas, or cysts, in the ovaries, which pose the risk of bursting and spreading the endometriosis to other nearby organs.

Category 3: Deep infiltrating endometriosis 1
The endometriosis has implanted in organs in the pelvic region, like the ovaries, rectum, and the outside of the uterus. The patient may be experiencing “frozen pelvis,” which is when scar tissue binds organs together and impairs their function.

Category 4: Deep infiltrating endometriosis 2
The endometriosis is present outside the pelvic region as well and may have implanted in distant organs like the heart, lung, and brain.

Healthertainment is an online platform who's mission is to empower people with health education and information on disease prevention, health promotion and safety.