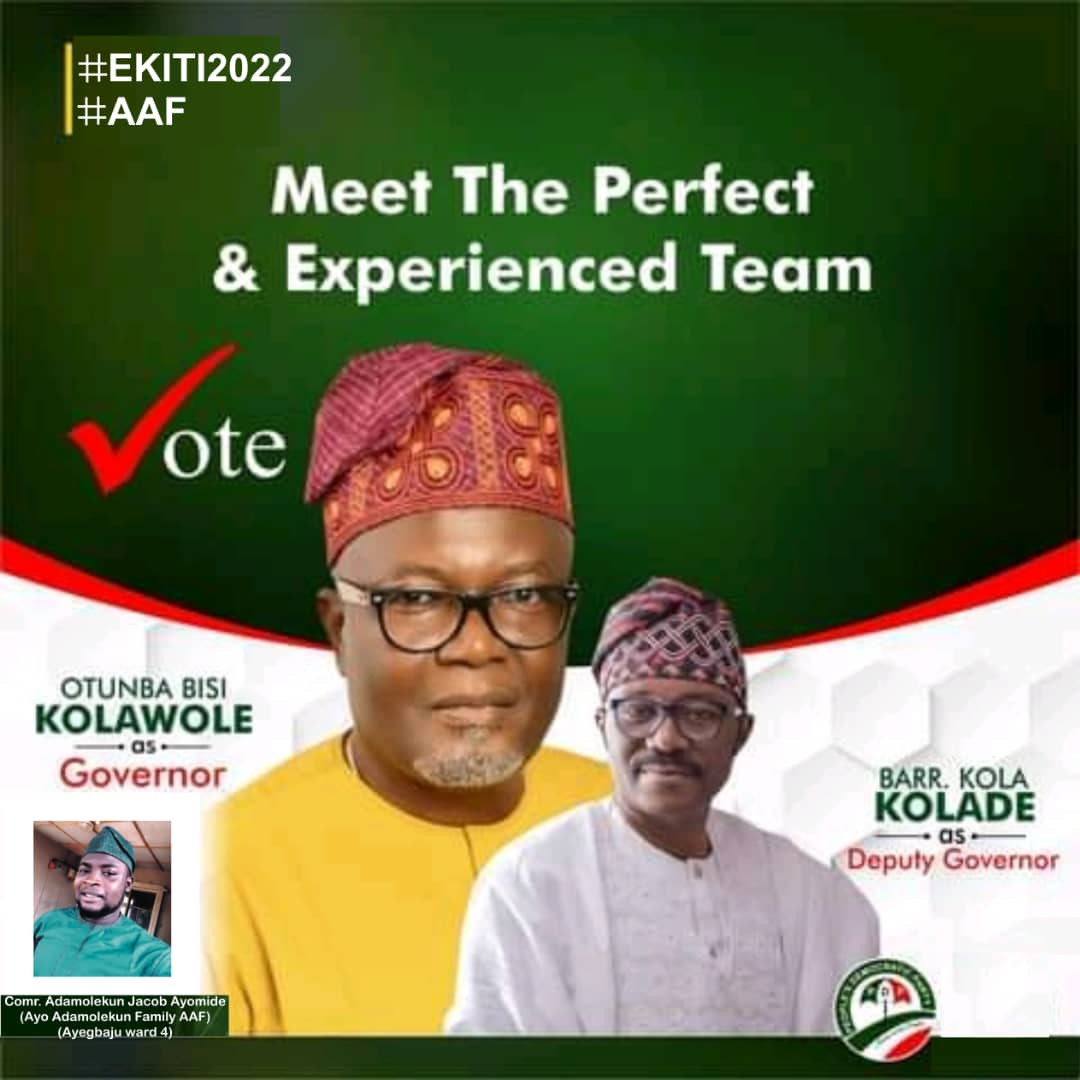 BISI KOLAWOLE FELICITATES WITH THE PUBLIC SERVICE ON WORKERS DAY 2022

BISI KOLAWOLE FELICITATES WITH THE PUBLIC SERVICE ON WORKERS DAY 2022

On behalf of the PDP EKITI STATE and my leader Dr. Ayo Fayose, I Otunba Bisi Kolawole, PDP governorship candidate in Ekiti State hereby felicitate with the Public Service in Nigeria and most especially the hardworking, diligent and productive workforce in Ekiti State on the auspicious milestone of the 2022 May Day celebration.

Unassailable is the fact that the PDP has established an industrial friendly environment with the public service in Ekiti State which had been nutured during our successive governments resulting in the strong Government/Worker bonding that characterized our relationship over time.

The PDP had conduced an industrial harmony in the state through:
1.Open and regular interactions with the workforce;

3. Provision of infrastructure and work equipment for workers including the magnificent governor's office,the state government secretariat,the state house of assembly complex and headquarters of the judiciary with state of the art finishing, furnishing and equipment;

4. Regular payment of workers salaries(on the 25th of each month) and other entitlements including leave bonuses;

5. Encouragement and enhancement of workers productivity through celebration of Workers Days,Teachers Days and rewards for outstanding performers including presentation of car gifts and real estates;

6.Training and retraining of workers including overseas trainings for workers across board;

7.Staff Housing schemes including the Ayo Fayose Schemes along Afao and Ikere roads,Irewolede Estate Ilawe road and Ifaki and both the Obasanjo Estate and the 23ha Staff Housing Scheme along Ikere road;

10. Establishment of two additional universities in Ikere and Ifaki and strengthening of personnel bases of the University of Ado-Ekiti and the University Teaching Hospital through the recruitment of 700 and 400 workers respectively;

Let me halt here meanwhile  since our landmarks in the overall development of Ekiti State are well known to you dear workers before the PDP was manipulated out of government about four years ago by these interlopers;

Your experience in the hands of the modern day task masters since 2018 through:

- Refusal to pay arrears of salaries even after collecting  2 tranches of bailout funds in 2018 and 2021. They lied they will pay all outstandings  within 3 months:

- Refusal to implement financial implications of workers promotions since 2017;

- Refusal to pay arrears of retirement benefits including pension and gratuity despite collecting bailout funds to offset same;

- Imagine the ridicule and cruelty of asking retirees to agree to 25% discount of their gratuity as ransom before payment;

- And so on and forth. These are additional to their arrogance and inaccessibility which you are fully aware of.

Dear workers,the basis for comparison now exists now that you have carried water and oil.
You now know who your true friend is.

Dear workers,I urge you to reflect on the 2022 May Day theme "Politics,Labour and Good Governance" and make up your minds to reject your tormentors.
What are you waiting for?

Return your true friend, the PDP, to Oke Ayoba next month and let us resume the strategic partnership and mutual respect that has heralded good governance and monumental growth in our state.

I salute you all and wish you happy May Day celebration.